What Happens When a Dog Gets Heartworm?

April is Heartworm Awareness Month, and so for the theme of this month, we wanted to go over what heartworm is, how it is transmitted, and what we can do to protect our pets.

Heartworm is a parasite that lives in a dog's heart, lungs, and blood. These worms can grow to a foot long and reproduce in a canine's body, causing lung disease, damage to other vital organs, and potentially heart failure. Thankfully for our feline friends, heartworm is much less of a problem. Their immune systems seem to fight off the parasite more effectively than a dog can.

How Does Heartworm Spread

Heartworm is a mosquito-transmitted disease. The cycle starts when a mosquito bites an infected dog; that mosquito then picks up blood that contains microfilariae, which are immature heartworms. These microfilariae mature in the mosquito to a larva state. The host mosquito then bites an uninfected dog, thus transferring the larva into the dog's bloodstream. Those larvae begin to migrate through the dog's tissues and mature into an adolescent stage between 50 to 70 days after the initial bite.

After 70 days, the worms become sexually mature and multiply, primarily in the pulmonary artery. Those new worms produce microfilariae that live in the blood and can be picked up by mosquitos to transmit to other dogs. Thus, the cycle starts all over again. 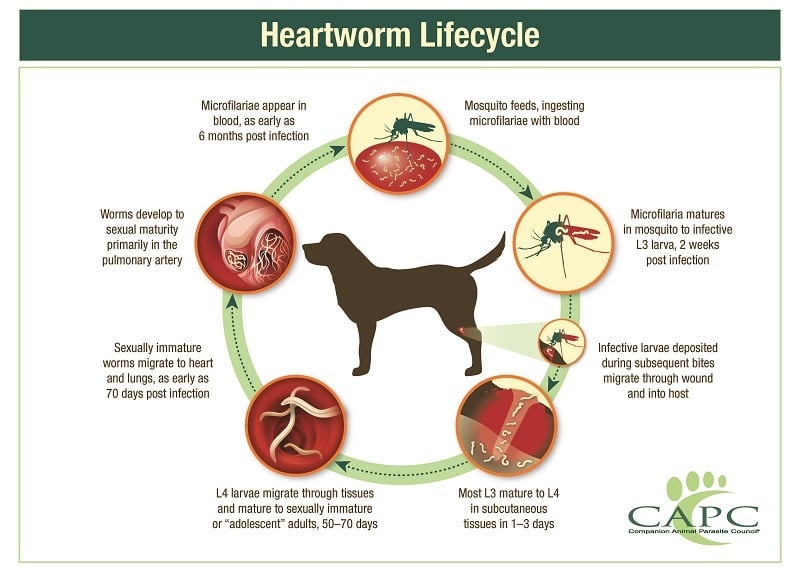 Symptoms and Treatment of Heartworm

Signs and symptoms you want to look for if you suspect heartworm are a mild but persistent cough, avoidance of activity, decrease in appetite, weight loss, and in developed cases, or an usually swollen belly.

Treatment is really unpleasant for infected dogs. Deep injections of a drug called melarsomine into the canine’s muscles over time are used to kill off adult worms. It's not very comfortable for the pet as Dr. Wunz explains in our Heartworm and Parasite video, "They're at high risk to have emboli from dead worms, little clots floating around their blood vessels, so they have to restrict them, so they don't get to run around have fun and play. It's a pretty miserable treatment for the pets, and the treatment is way more expensive than prevention for sure."

Preventives are so much easier now than they used to be five or ten years ago. For a long time, we recommended a tablet like Heartgard® you give to your pet on the same day every month. Now there is an injection your veterinarian can prescribe that is given once a year. Talk to your veterinarian about which prevention method is best for your pup. Feline prevention for heartworm is Revolution® and Revolution Plus®. They make a great product that is given once a month on the back of the neck, and they're covered.

These two parasites are the most common we see in our hospital. Again, the preventives we're giving for heartworm do take care of hookworm and roundworm.

Every puppy has roundworms; they get it when they are in the uterus. That is why we have to deworm puppies, so roundworm is not spread to humans or other pets.

Hookworms are another story. Dr. Wunz explains, "often people are surprised when they find in the exam room when I tell them that the parasite (hookworm) can go up through a dog's footpads." Hookworm can cause anemia for dogs. Even people can be infected, we get a rash also known as "plumber's itch" if exposed to that parasite. Again, the heartworm preventives cover that, and some even cover whipworm, so your pooch is getting more coverage.

In short, all of the parasites listed above are ones you'll want to protect your canine and feline friends from. For more on this subject, check out Dr. Wunz's video on heartworm and other parasites and how you can avoid them.

Nikki is the marketing manager for IPH and has been writing for Intermountain Pet Hospital since 2014.

Find me on social media: