Does my Dog Need Knee Surgery?

When your dog tears their cruciate ligament, it's not a fun time for you or your dog. That is why we put together this guide to help you understand your options so you can choose the right one for your canine colleague.

When the CCL is torn or injured, the shin bone (tibia) slides forward with respect to the thigh bone (femur), which is known as a positive drawer sign. Most dogs with this injury cannot walk normally and experience pain. The resulting instability damages the cartilage and surrounding bones and leads to osteoarthritis (OA).

What options are there for repairing my dog’s torn CCL?

When the cranial cruciate ligament is torn, surgical stabilization of the knee joint is often required, especially in larger or more active dogs. Surgery is generally recommended as quickly as possible to reduce permanent, irreversible joint damage and relieve pain.

Several surgical techniques are currently used to correct CCL rupture. Each procedure has unique advantages and potential drawbacks. Your veterinarian at Intermountain Pet Hospital will guide you through the decision-making process and advise you on the best surgical option for your pet.

What is the TTA?

The TTA surgery changes the angle and relationship of the femur and the tibia. The overall intent of the surgery is to reduce the amount that shifts forward during a stride. Because it is considered slightly less invasive than TPLO, many dogs appear to recover quicker. Most dogs, with either at TTA or TPLO, are nearly normal 4 months after surgery.

The TTA procedure is more commonly performed in dogs with a steep tibial plateau or angle of the top part of the tibia. Your dog’s surgeon will evaluate the joint geometry to determine which procedure is ideal.

In simplest terms, the front part of the tibia is cut and separated from the rest of the tibia. A special orthopedic spacer is screwed into the space between the two sections of bone to slide the front part of the lower knee forward and up. This moves the patellar ligament (the thick fibrous band that runs on the front of the knee from the top to the bottom of the joint) into better alignment, thereby removing some of the abnormal sliding movement. A bone plate is then attached to hold the front section of the tibia in the proper position. By changing the alignment of the patellar ligament, the forces that cause the femur to slip back when the CCL is torn instead move straight down the tibia, resulting in less shearing force or instability.

What is the TPLO?

TPLO surgery involves making a curved cut in the tibia from the front to the back, much like half a smiley face. The top section of the tibia is then rotated backward until the angle between the tibia and femur is deemed “appropriately level,” typically between 2 and 14 degrees, with 5 degrees being the ideal angle. A metal bone plate is then used to affix the two sections of the tibia in the desired positions, allowing the tibia to heal in its new configuration. 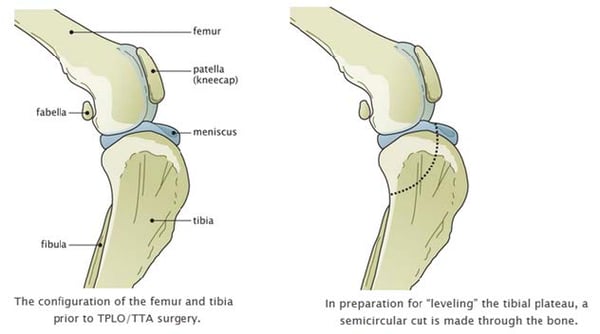 To better understand the purpose of changing the angles in the joint (TTA and TPLO), we often use the analogy of a wagon on a hill.

Imagine a wagon tied to a post on the slope of a hill. As long as the rope holds, the wagon doesn’t roll downhill. If we add excess weight (or downward force) to the wagon, the rope could break and the wagon will roll down the hill. However, if the wagon is on level ground, it will not roll forward with added weight, even if the rope is broken.

In this example, the wagon is the femur, and it slides the downslope of the top of

the tibia when the CCL is ruptured. This instability leads to damage and destruction of the cartilage and bones of the knee joint. TPLO surgery “levels” the tibia to prevent the femur from sliding forward, thereby stabilizing the joint.

What is Extracapsular Repair? 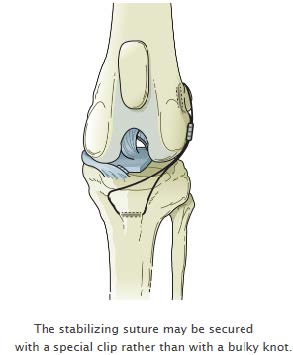 This technique is also called lateral suture stabilization. It involves creating a synthetic ligament outside the joint with a heavy suture. The idea is to mimic the angle of the cruciate ligament with a suture that is placed outside the joint capsule. This method works well on small dogs and cats, but not as well in very athletic dogs greater than 30# in size.

What can I expect if my dog has TTA or TPLO surgery?

Healing from TPLO and TTA surgery is generally rapid.

Pain management during and after stifle surgery is critical, so be sure to give all medications as prescribed and use them until they are gone. Physical rehabilitation post-operatively will speed healing. Ask your veterinarian about incorporating rehabilitation into your dog’s recovery plan.

The most common complication after TPLO or TTA is an infection. Studies conclude that infection occurs in less than 10% of all patients, with many surgeons reporting much lower complication rates. Your dog will need several recheck examinations and radiographs (x-rays) to ensure that the area is healing properly.

Are TPLO and TTA better than other types of CCL surgeries?

“TPLO and TTA offer many benefits over older procedures such as extracapsular repairs (ECLS), especially for larger or athletic dogs.”

TPLO and TTA offer some benefits over older procedures such as extracapsular repairs (ECLS), especially for larger or athletic dogs. Dogs undergoing TPLO or TTA tend to heal faster, resume normal activities quicker, and have a better range of motion in the knee.

Currently, most veterinary surgeons consider TPLO and TTA to be the preferred treatments for larger, more active dogs. Also, newer data suggest that it may be wise to have the TPLO plate removed sometime after the leg is completely healed to prevent a reaction to the orthopedic implant.

Your veterinarian will guide you through the decision-making process to determine which procedure provides your dog with the best chance of full recovery.

This client information sheet is based on material written by: Ernest Ward, DVM, and Robin Downing, DVM, CVPP, DAAPM.

© Copyright 2013 LifeLearn Inc. Used and/or modified with permission under license.