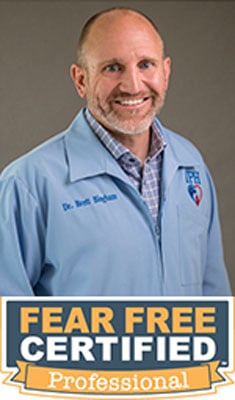 Dr. Bingham joined Intermountain Pet Hospital's veterinary team in 2001. He became part-owner in 2007 and became sole owner in June 2017. His path to Intermountain began on his father's dairy farm in the small town of Gooding, ID, where he developed a love of working with animals. He wrestled in college at Ricks College (now BYU-Idaho) and Boise State University where he received All-American Honors and graduated with his Bachelor's degree in Science. He received his Doctorate of Veterinary Medicine from Washington State University, graduating Magna Cum Laude in 2000. His area of medical interest includes diagnostic endoscopy, laparoscopy, ultrasound, dentistry, and reproduction.

Dr. Bingham firmly believes that the bond between pets and people fosters healthy and happy living. He finds great satisfaction in enriching the lives of those in the community by providing exceptional medical and surgical services to all his patients. His home life includes his wonderful family--his wife, five children, dog Milo, and two cats. Whether he's at home or work, he stays busy. His favorite hobbies are cruising around on his motorcycle with his five brothers, skiing (water or snow), mountain biking, running, and working on his mini-farm located in the beautiful Treasure Valley.