Spay and Neutering: An In-depth Look

When you get a new puppy, kitten, adult dog, or cat, one of the biggest decisions that you'll need to make initially is whether to spay or neuter your pet, when to do it, and how.

Whether to Spay or Neuter Your Pet

We spay and neuter all cats around six months of age. We do this because once cats go through puberty, their hormones can cause drastic behavior changes. Some owners have even reported thinking their cat was having a seizure because of these changes. If you want kittens or wild and sometimes unpredictable behavior, you can let them go through puberty; otherwise, we recommend spaying or neutering cats at six months.

Assuming that your dog will not be used for breeding, there is no one-size-fits-all answer when it comes to spaying or neutering dogs. It depends on many variables such as their breed, likelihood of future medical issues, and how big they will be as adults. It also depends on what your dog’s lifestyle will be. Will your dog have a job like herding farm animals or hunting, and will they be exposed to other dogs, especially other intact dogs? A lot of research has come out over the last couple of years that has given us some guidelines.

This conversation starts with you asking, "I really want to know the best time to spay or neuter my pet." You and your veterinarian will discuss your pet's individual circumstances, the pros and cons, the risks and benefits, and decide on the best time. Every recommendation will be a little bit different for each canine.

When to Spay or Neuter Your Dog

Puberty in dogs happens between nine and 11 months of age when dogs develop all their sexual hormones. Studies show that spaying or neutering dogs before puberty can significantly increase the risk of orthopedic disease.

The orthopedic conditions affected by these puberty hormones are ligament tears, hip dysplasia, elbow dysplasia, and arthritis. Some studies have shown a higher incidence of some cancers in dogs spayed or neutered before puberty, like hemangiosarcoma and lymphoma.

Size plays a big part on when and how you spay or neuter your pet. A recent study conducted by the University of California, Davis, looked at the size of the canine, not the breed. It is suggested that dogs larger than 45 pounds as adults have a significantly higher risk of orthopedic disease if they're spayed early. We can safely conclude the smaller the breed, the less risk there is to spay and neuter early.

A whole different discussion will occur for large or giant breeds such as Great Danes and Mastiffs on if or when to spay or neuter.

If your cuddly canine is a female, we generally suggest letting her have one heat cycle, which happens around ten months of age. The surgery will then be scheduled about three months after the first cycle ends. We recommend three months because, typically, dogs cycle on average every six months. You'll want to go right in the middle of the cycles because the hormones from the previous cycle will be dormant, and the hormones for the next cycle won't be rising yet.

Now if you have a giant breed female like a Great Dane, Mastiff, or Newfoundland, we recommend letting her have two heat cycles. The first cycle happens around 11 months for giant breeds and then probably occurs six months later. Once the second cycle had ended, schedule the spay for three months after the second end date.

The next decision to make is which technique to use. Below we have listed some of most common spaying techniques available in the United States, what the surgeries entail, and the pros and cons of the surgery.

Traditional - For the past few decades, the most common way for an owner to make sure their furry females do not get pregnant is to remove the ovaries and uterus. Having your dog get a traditional spay is 100% effective at preventing future pregnancies. 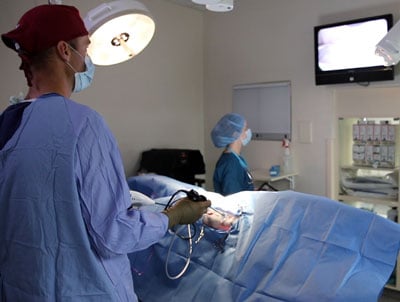 Laparoscopic Spay – This surgery method is where a veterinarian makes two tiny incisions in the canine's abdomen. The veterinarian will insert a camera in one incision and then insert the surgical instruments in the other incision. The doctor uses a monitor synced with the surgical camera to perform the procedure.

Tubal Ligation – This procedure is informally known as getting tubes tied. The procedure blocks the fallopian tubes to prevent a female's egg from traveling from the ovaries to the uterus. While this procedure can be easily done via laparoscopic surgery, we recommend an ovary-sparing spay over a tubal ligation to prevent pyometra (uterine infection). 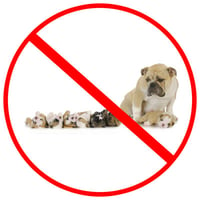 Like spaying a female, once you know you will neuter your male dog, you must now decide when and how. Below we have listed some of the most common neutering surgeries and one pharmaceutical method available in the United States, what they all entail, and the pros and cons of each.

Traditional (complete castration) - The testicles are surgically removed, and the blood supply and vas deferens are tied off.

Laparoscopic Neutering – There is only one reason to do laparoscopic neutering. That is if a dog suffers from cryptorchidism, a condition that happens when one or both testicles do not drop into the scrotum.

Vasectomy – Vasectomies are different than traditional neuters. The testicles are left intact while a portion of the vas deferens is removed and tied off.

Chemical Neutering - (using the drug Zeuterin) This is also called a zinc neuter. A veterinarian will inject Zeuterin into the testicles causing inflammation, leading to fibrosis in the testicles, causing the dog to become sterile. Intermountain Pet Hospital does not offer this drug, or others like it, at any of our locations.

Be sure to weigh the pros and cons with your veterinarian. You should always sit down with a veterinarian to discuss the lifestyle you plan to lead with your dog, any health issues your dog may have (such as cryptorchidism), and any concerns or questions. This will help you make the best choice for your family and your pup.

When and how to get your pet spayed or neutered is not as cut and dried as it used to be. There are some general guidelines to get the conversation started. We also have many scientific studies to help us protect dogs from orthopedic issues and some cancers, which allows them to live healthier, stronger, and happier lives.

Click on the ebook cover to down the file. 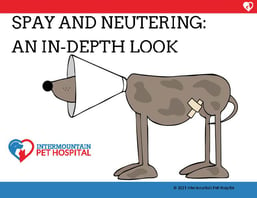