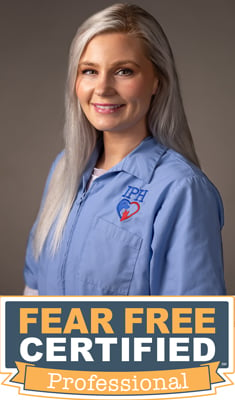 Dr. Ashley Kimbel grew up in Portland Oregon, the city of roses and rain. She received her undergraduate degree from Portland State University in Biochemistry. Dr. Kimbel then went on to Oregon State University to receive her Doctrine of Veterinary Medicine.

After graduation, Dr. Kimbel moved to Boise for an internship in medicine and surgery at West Vet. She did predominantly ER medicine which taught her to think quickly on her feet. However, Dr. Kimbel knew that her passion was with a general practice hospital where she could follow her patients through life and celebrate each small victory like they are all a part of her family. Dr. Kimbel then transferred to the family at Intermountain Pet Hospital.

Dr. Kimbel is owned by a cat named "Kitty" and a yellow lab named Danny. Kitty acts like she hates her younger brother but secretly she believes she is teaching him invaluable life lessons, like communication through body language. In her spare time, she likes to try new things and has discovered she enjoys studying the art of growing an underwater garden and aquascaping.