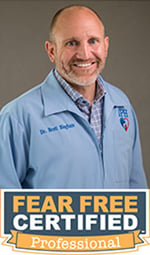 Dr. Bingham joined Intermountain Pet Hospital's veterinary team in 2001. He became part-owner in 2007 and became sole owner in June 2017. His path to Intermountain began on his father's dairy farm in the small town of Gooding, ID, where he developed a love of working with animals. He wrestled in college at Ricks College (now BYU-Idaho) and Boise State University where he received All-American Honors and graduated with his Bachelor's degree in Science. He received his Doctorate of Veterinary Medicine from Washington State University, graduating Magna Cum Laude in 2000. His area of medical interest includes diagnostic endoscopy, laparoscopy, ultrasound, dentistry, and reproduction.

Dr. Bingham firmly believes that the bond between pets and people fosters healthy and happy living. He finds great satisfaction in enriching the lives of those in the community by providing exceptional medical and surgical services to all his patients. His home life includes his wonderful family--his wife, five children, dog Milo, and two cats. Whether he's at home or work, he stays busy. His favorite hobbies are cruising around on his motorcycle with his five brothers, skiing (water or snow), mountain biking, running, and working on his mini-farm located in the beautiful Treasure Valley.

Dr. Sauer has been at Intermountain since 2000. Originally from the Phoenix, AZ area, she moved to Meridian in 1995. She earned her B.S. from the University of Arizona in 1984 and her D.V.M. from Washington State University in 1988. She is certified in veterinary medical acupuncture from the CuraCore Integrative Medicine Education Center in Colorado, and is a candidate for certification in western herbal medicine through College of Integrative Veterinary Therapies.

Dr. Sauer specializes in speaking "cat language" and is exploring furthering her training in behavior medicine. She believes in the power of pets in our lives—whether they walk, crawl, fly or slither—and constantly explores different ways of keeping them healthy. She lives with Brian, her husband of many years, and their college-age son. They share their home with a bloodhound named April, a sassy tabby cat named Zeek and an ever-changing population of rodents. For fun and excitement, she enjoys hiking with her family, Jazzercise, and cross country skiing.

Dr. Hunt received his D.V.M. from Washington State University in 2008. To pursue his love of high-quality medicine, he completed an internship under the tutelage of boarded specialists in the areas of surgery, internal medicine, dermatology, ophthalmology, cardiology and canine rehabilitation at WestVet Animal Emergency and Specialty Center.

In 2012, Dr. Hunt decided to pursue advanced training and certification in canine physical therapy and rehabilitation from The Canine Rehabilitation Institute. He joined the Intermountain Pet Hospital team in 2013. He enjoys improving the human-animal bond through rehabilitation services with our clients and patients. His other interests include ophthalmology, internal medicine, minimally invasive surgery, and general medicine.

Originally from Boise, Dr. Hunt shares his life with his wife Julie (also a veterinarian), two beautiful daughters and one handsome son. He also has two pets, Darwin's Dodo the dog and Cleo "Smitten" the cat. When Dr. Hunt has free time, he likes to fish, run, and ski out in Idaho's great outdoors.

Dr. has a B.A. from Cornell College and her D.V.M. from Iowa State University.

She grew up in rural Illinois and has lived and practiced in Idaho for 20 years. She has a special love for ferrets but enjoys helping dogs, cats, birds, reptiles, and all the other small, furry pets. She is a member of the Association of Exotic Mammal Vets, the Association of Avian Vets and the American Ferret Association.

Her family is currently owned by two crazy cats and two sweet ferrets. She is also especially fond of both vintage music and vintage-style dancing.

Dr. Kelley Miller was raised in Homer, Alaska where her grandparents owned a seafood cannery. She achieved her BS at The University of Florida in 1991 and completed a D.V.M. degree at Purdue University in 1995. Originally interested in wildlife medicine, she ultimately decided that she wanted to, instead, focus on helping enrich owner's relationships with their pets as her pets had enriched her own life. She tremendously enjoys traveling and has practiced in Indiana, Oregon, Alaska, and just recently near Houston. While in Houston, she worked extensively with the local shelter and rescue groups, donating her time and efforts towards tackling the homeless pet problem in that area.

Dr. Miller especially enjoys dentistry, internal medicine cases, and senior pet care. She is excited to be joining the Intermountain Pet Hospital team and hopes to contribute to the high quality of medicine they provide. She believes her job is to keep current on the rapidly changing field of veterinary medicine, educate and listen to owners while working with them to provide the best care possible to the pet. And at the same time, she wants the pet's experience to be positive where they look forward to coming in every time.

Dr. Miller lives in Eagle with her 17-year-old daughter (), Pudge (a smart but naughty Heeler), and 2 adorable kitties....all rescues (except her daughter). During her precious free time, she enjoys reading, hiking with her boyfriend (Ronnie) and Pudge, and making things like stained glass and pottery. 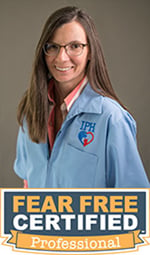 Dr. Wunz, a transplant to Idaho, originally hails from Pennsylvania. After obtaining her Bachelor of Science in Biology at the University of Pittsburgh at Johnstown, she attended The Ohio State University completing her Doctorate of Veterinary Medicine in 2000.

Following veterinary school, Dr. Wunz did a small animal internship at Oradell Animal Hospital in New Jersey. For the next 3 years, she practiced small animal medicine in Colorado, then returned to Pennsylvania until finally deciding to settle west in 2018 to practice progressive, quality medicine with the Intermountain Pet Hospital team.

Dr. Wunz is most interested in preventive, internal, and exotic (especially guinea pigs and rabbits) animal medicine. She brought her husband, 2 kiddos and 1 rescued cat to enjoy the friendly people and beautiful climate of the Treasure Valley where they plan to hike, bike, ski, and raft at every opportunity. 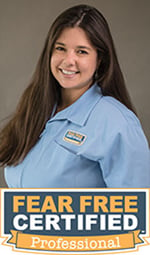 Dr. Stephanie Scott is a native Oregonian who recently moved to Idaho after a brief stint in Arizona. She moved here with her husband, daughter, and their four-legged (and one three-legged) familiars.

Prior to veterinary medicine, Dr. Scott received two undergraduate degrees; the first was a BS in Biology from Oregon State University with two minors, and her second was a BS in Nursing from Oregon Health Sciences University.  She worked as a registered nurse for some time before pursuing her true love of veterinary medicine.  Her pursuit led her to earn her Doctorate of Veterinary Medicine from Oregon State University in 2013. Since that time, she has worked in Oregon and Arizona as a general practitioner in several clinics and has now found a home at Intermountain Pet Hospital.

From the time she was young, Dr. Scott felt a special connection with animals of all shapes and sizes. This amazing human-animal bond continues to intrigue and drive her to provide the best care she can for our furry family members.  She loves geriatric and hospice care, and enjoys making our pets' golden years as comfortable and full of life as possible. She also enjoys wound management and is always amazed at how the body can heal.

Dr. Sarah Hadley joined the Intermountain team in December of 2019. She was born in Seattle but grew up not too far from Meridian in the Wood River Valley. Her love of animals started young, as she spent her childhood with dogs, cats, a pony, and various fish and salamanders. She got her undergraduate degree in Studio Art (with a generous share of science classes) at Scripps College in Claremont, California. She went to veterinary school at Colorado State University in Fort Collins, graduating in 2004 with a focus on small animals. She has worked in private practice in Arizona, Sun Valley, Boise, and Meridian.

Dr. Hadley has lived in Boise since 2006. She is interested in wellness care and the human-animal bond; she enjoys getting to know people and their pets and building relationships with them. In her time off, she can be found reading, watching movies (the geekier, the better), and walking her beautiful Border Collie, Lucy.

Dr. Throne is a native of the Treasure Valley.  She obtained her B.S. in Biology with a business minor from Boise State University and completed her DVM at Washington State University in 2011. Following the completion of veterinary school, she moved to Northern California to complete a one-year small animal medicine and surgery internship at the VCA Sacramento Veterinary Referral Center. She then worked at a small animal general practice in the area for 6 years before returning to Idaho.

Dr. Throne enjoys internal medicine, soft tissue surgery, and preventive care. She is happy to have the opportunity to practice high-quality medicine at Intermountain Pet Hospital.

Dr. Throne spends her time outside of work with her husband, who is also a veterinarian, and their two boys. She also has two pets- Harrison, a Yorkshire Terrier/Maltese rescue, and Lyra, a Siamese mixed cat. 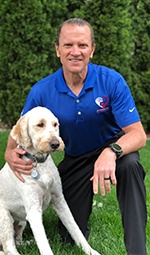 Dr. Toby has recently joined the amazing Team at Intermountain Pet Hospital. He has been actively involved in his human Chiropractic practice since 1999 and is now joining his brother, Dr. Brett Bingham in not only helping to change peoples lives but now animals too. He currently operates two successful practices (Boise and Meridian) and has loved serving his patients over the past 18 years and he will continue to serve them.

He received his Doctorate of Chiropractic from Western States Chiropractic College in Oct 1998. His focus has always been on family health and loves all his patients. He has been certified in Webster Technique, Integrator, Diversified, and Activator methods. He has always believed that you are “Healthy by Choice, not by Chance”.

Dr. Toby is a very active individual and ALWAYS seems to have a smile on his face. “Never a bad day” kind of attitude! He loves to cycle, swim, and run. He has picked up doing Triathlons as of 2011 and has a few Ironman races under his belt. He loves the outdoors and spending time on the water with his family and friends. He has a very supportive family of 3 kids and an amazing wife. They spend as much time together as possible. If you can’t find Dr. Toby around anywhere, there is a very good chance he is on his bike somewhere riding country roads. He has a Labradoodle, Ted, and a cat, Ellie, who are important parts of his family.

Dr. Toby is passionate. He LOVES his job. He loves to serve and he can’t wait to serve his new clients and patients at Intermountain Pet Hospital. 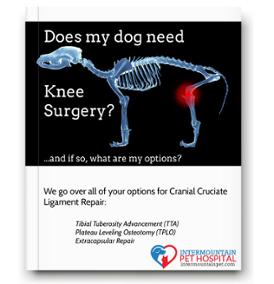